Election Day 2008 was history and President-elect Obama went to work selecting his new cabinet.  As with everything he has done, President Obama’s cabinet selections were intelligent, thoughtful choices. He chose people who were not only experienced and qualified, but also who believed in, and were committed to, the missions of the agencies they were chosen to lead. All were seasoned professionals who were philosophically aligned with the man voters had chosen as their President.  Among his quality appointees were Kansas Governor and former Insurance Commissioner Kathleen Sebelius, Senator Hillary Clinton, and D.C. Superior Court Judge Eric Holder.

The inauguration on January 20, 2009 was reminiscent of the “Camelot-like” inauguration of John F. Kennedy in 1961.  The debonair President-elect and his elegant, fashionable wife — both Harvard Law School graduates — were stunning as they paraded down Pennsylvania Avenue and floated through the inaugural balls.  They warmly connected with adoring crowds, many of whom were still reeling with happiness at the realization that our country had, at long last, elected a President who looked like them. 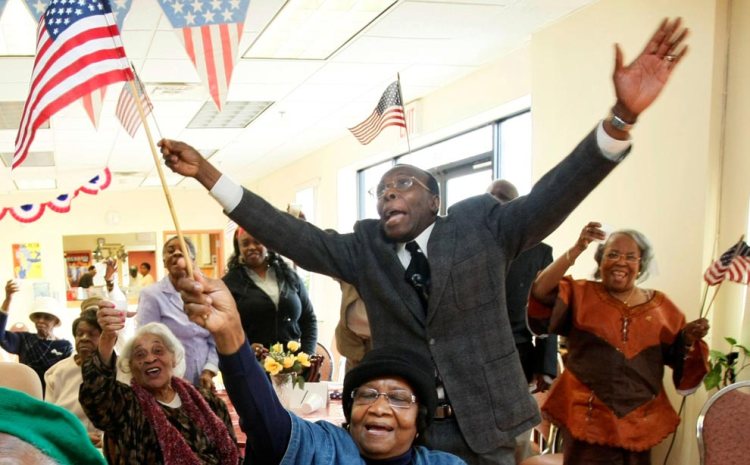 There were so many wonderful images from Inauguration Day 2009 that I had difficulty making a choice. There were images of the new President dancing with his beautiful wife Michelle at the inaugural balls, pictures of the swearing-in, and some wonderful images of the President and First Lady with their adorable young daughters. However, I decided upon this image of people at a Brooklyn senior center celebrating the moment that the new President completed his oath of office.  I believe this image, more than the others, demonstrates the historical significance of the inauguration of President Barack Obama.

Retired in 2015 after three years as a senior research fellow at the Georgetown University Health Policy Institute's Center on Health Insurance Reforms, preceded by 2 years at the U.S. Department of Health and Human Services in the Office of Consumer Information and Insurance Oversight (agency implementing the Affordable Care Act), six years advocating for Hemophilia patients and their families, and nearly 10 years as an Indiana insurance regulator -- last seven as Insurance Commissioner. View more posts